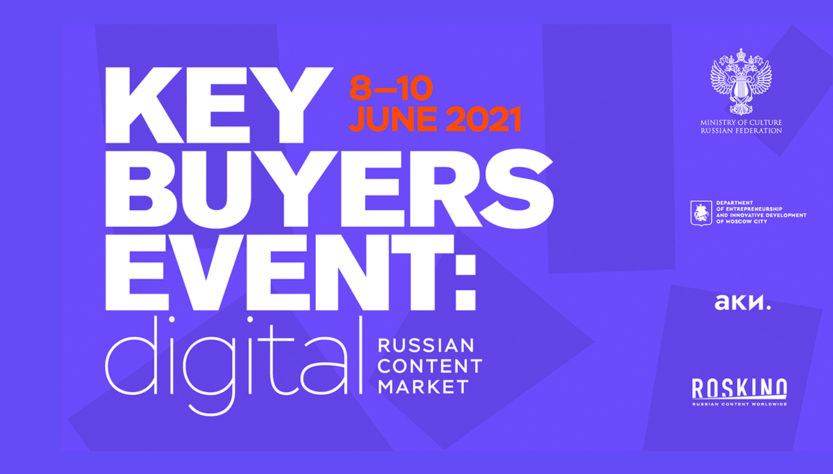 Key Buyers Event: Digital  announced that the third edition of the event will take place virtually on 8-10 June 2021. The successful international online market of audio-visual content from Russia will present exciting new projects, showcase prominent producers and local emerging and established talents. The event will traditionally center on the distribution market, but this year it will also focus on co-production to promote international co-productions and partnerships with the most highly anticipated Russian projects in development.

The event is organised by ROSKINO, the Russian state film body charged with the international promotion of Russian audio-visual content, and supported by the Department of Entrepreneurship and Innovative Development of the City of Moscow and the Agency for Creative Industries.

Last year, the Key Buyers Event: Digital edition gathered over 1,400 participants from the global film industry including 600 international distributors from 70 countries. This year’s accessible programme will be presented digitally, offering opportunities for international and Russian industry delegates to participate in a significantly expanded programme to include talks and panel events, screenings, exclusive market intelligence, and networking opportunities. International participants are invited to join on a free basis.

The event will host world premieres and screenings of brand-new projects across all genres, distribution market, conference sessions with international and Russian experts, co-production pitches, and online negotiations. The expanded co-production programme will be a platform for global producers, sales agents, distributors, commissioners, financiers, and other key players to collaborate on high-quality projects, network, and explore new opportunities for collaborations with Russia. Russia’s major VOD platforms are invited to present their new originals for the first time.

This year a new strand of the programme will be dedicated to projects that appeal to global film festivals. Russian titles in development will be presented to festival programmers and distributors of independent films.

«Russian content has enjoyed increasing levels of success within the global market over the last three years. Russian films have increasingly become popular – the latest example is “Sputnik”, a sci-fi horror that has been acquired for an English-language remake in Hollywood. TV drama is being created and consumed at a rapid pace, «To the Lake» secured a spot-on Netflix’s most-watched chart around the world, including the USA. Wizart’s animated feature «Secret Magic Control Agency» is another example of a project that has found huge audiences securing the platform’s №1 slot around the world. The national film and TV industry continues to gain momentum and acclaim by creating unique yet universally appealing stories, that are of high production quality. This year the Russian content market has a wide range of new original content to offer international audiences. Following ‘Covid-safe’ guidelines film and high-end TV have been in production since last summer, so national companies will present premiere titles and work-in-progress projects. Key Buyers Event: Digital is an opportunity for the global industry to get an exclusive look at all the new content from Russia,” – says Evgenia Markova, CEO of ROSKINO.

Expocontent, the official representative of the largest audio-visual content markets MIPCOM and MIPTV in Russia, Ukraine, and CIS countries, will become the event partner. The technical partner responsible for the platform support is SPB TV company.

KEY BUYERS EVENT: Digital will be held in English.
The programme will be announced soon.

ROSKINO is a state body representing the Russian industry of audiovisual content on the international markets, a national operator for the promotion of films, series and animation as well as the creative potential and coproduction opportunities within Russia. The company also acts as an industrial expert and organizes tailor-made educational programs for Russian talent. ROSKINO promotes Russian content at the key international film markets and organizes the Russian film festival worldwide.

Participants’ registration will open on April 15.