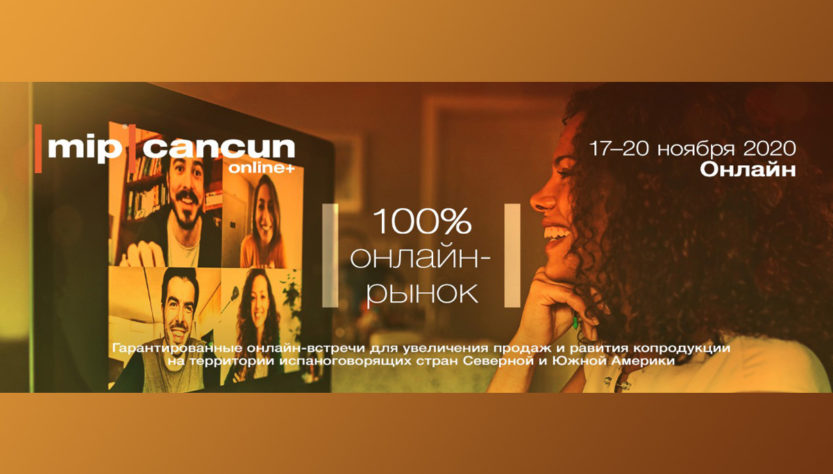 Most of them are already known in Latin America and Spanish-speaking countries — sci-fi movies, dramas and horrors from Russia traditionally present national industry on top TV channels, platforms and theatres around Latin America.

«MIPCancun grows every year, in terms of numbers and buyers representation from the largest TV networks to VOD-platforms. This reflects the ever-growing Hispanic market itself, which has already shown interest in Russian horrors, sci-fi, period dramas and animation. This year the national delegation is twice as big as in 2019, and will present a slate of fresh content, which is possible due to the digital format of MIPCancun,» says Alexandra Modestova, CEO of Expocontent (Official representative of MIPCancun in Russia, Ukraine and CIS).

The leading Russian content distributor Central Partnership (part of Gazprom Media) will present a fantastic series“Gogol” based on the famous novels by Nikolay Gogol starring Alexander Petrov (“Invasion”), TV series “Bolshoi”about the backstage of ballet world by Valeriy Todorovskiy (“Six Empty Seats”) and sci-fi series “The Blackout” directed by Egor Baranov. “The Blackout” is already known to international audiences, having been sold to more than 100 countries including USA, Japan, South Korea, Germany and others.

Flagship titles in the NTV’s lineup are TV show “Secret for a Million”, historical series “Noble Detective” and a new season of “Beyond Death”. The company will highlight its vast catalogue at the dedicated showcase to be held on the MIP Cancun Online+ platform on 19th of November.

The slate from Sovtelexport, the official distributor of Russia Television and Radio’s content, includes dramas based on real events: «Zuleikha Opens Her Eyes» by Yegor Anashkin and «On the Edge», focusing on the story of 3 young women in terrorists’ captivity by Yevgeny Lavrentiev. Another drama from Yegor Anashkin, «The Blood Widow»starring Yulia Snigir (“The Young Pope”) centers around a Russian noblewoman known as a sadist and serial killer. These titles are part of the package acquired by Olympusat: the companies are now finalizing negotiations on the deal, which will also include series “Ekaterina: Pretenders”, «Godunov», “Blackout”, “The Optimists” and “Demon of the revolution”. Colombian state TV channel Senal Colombia has also confirmed the acquisition of series “Ekaterina: Pretenders”, the first two seasons of which have already been aired on the channel.

GPM ETV (Gazprom-Media Entertainment Television) will offer a line-up of TV shows and series from several TV channels of the holding — brand-new series «IKOTKA» by Igor Tverdokhlebov which was selected for the Fresh TV Fiction at MIPCOM this year, «The Documentalist: Ghost Hunter» by Ilya Kulikov, romantic TV show «The Secret»selected for Fresh TV Formats rating and “The Secrets of Kremlin”, a documentary project by Friday TV channel.

Yellow, Black and White and its streaming service START present a new mystery thriller “SHERLOCK: The Russian Chronicles”, Russian spin on one of the world’s most famous characters — the project has already been marked by The Wit company in Fresh TV Fiction and attracted interest from the sherlockian community in the UK and USA.

All Media Company brings “The Last Warrior: Root of Evil”, a feature film by The Walt Disney Company (Russia) and Yellow, Black and White and “10-title documentary cycle by Vladimir Pozner”.

Russian studios also present new animation projects, some of which have already gained vast popularity in Latin America and across Spanish-speaking territories.

Soyuzmultfilm will offer “Rockoons”, its brand-new musical series for the youngest audience, detective comedy series “The Secrets of Honey Hill” for 4-6 year-olds and the animated series “Claymotions” for early pre-schoolers, which is created in a rare technique of clay animation. The studio will also show a premiere episode of a 3D reboot of the popular gag-сomedy “I’ll Get You!”. The company will be looking for co-production partners for new titles “Umka” and “Frosh”.

Key projects by RIKI Group, which will take part in the co-production forum, are the educational comedy series “Question Club”, therapeutic fantasy comedy “The Amazing Spoilers”, and series “Above the Ceiling” for preschoolers. Content from “Riki Group” is already well-known in Latin America and beyond — in October Brazilian TV channel Gloobinho, that had broadcasted “Babyriki» before, began airing the «Tina & Tony» series, presented in four daily slots at once. The Gloob channel is planning to show full-length animated films “The Fixies» soon (international sales are handled by Central Partnership (part of Gazprom Media Holding).

Expocontent — communication agency specializing in international and domestic PR and organization of business and cultural events. The company promotes national television, film and animation projects abroad, as well as foreign cultural projects and initiatives in Russia.

Over the years, Expocontent has operated united stands of Russian content (Russian Cinema, Made in Russia, Created in Moscow) at the key international film and television markets. In 2019 the company organized an international forum “Key Buyers Event” in Moscow with the support of the Ministry of culture of the Russian Federation.