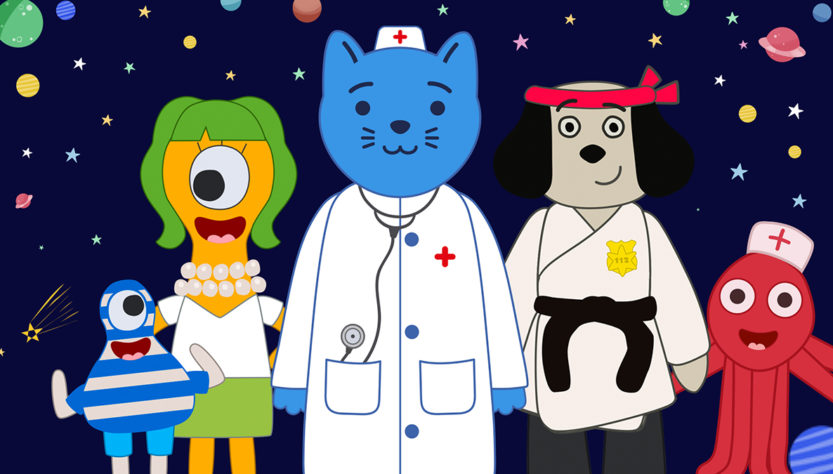 During this holiday season, the animated series Space Doctor Cat premiered on one of the largest digital platforms Amazon Prime Video on the territory of the USA and Great Britain. The broadcasting geography is expected to expand via other digital platforms all around the world. Season Two of Space Doctor Cat is scheduled to premiere on the digital services of China in February 2021 once the dubbing to Chinese is finished.

The first seasons of ‘Blinky & Knobby’ and ‘Space Doctor Cat’ have been available on China’s largest digital platforms since last year.

‘Blinky & Knobby’ is a non-dialogue 3D web-series aimed at 2–4-year-olds. It’s a story of two alien creature friends. Knobby is a funny purple creature and Blinky is pink. Their spaceship is a cloud. After a crash, Blinky and Knobby fall from the sky into a forest and meet inhabitants of the Earth. The place is new to them, so they constantly get into awkward situations. But the two friends never give up and solve all their misdoings. The first season comprises 26 episodes. The Russian premiere of Blinky & Knobby was in April 2019 on the online platform IVI.ru.

‘Space Doctor Cat’ is a learning-oriented project for toddlers. In the form of a play, it teaches the youngest about the basics of a healthy lifestyle, hygiene, and safety. It is a story of a Cat that lives in an imaginary galaxy and works as a doctor. Space Doctor Cat flies a spacecraft and helps the inhabitants of various planets. The first season comprised 26 5-minute episodes of the puppet show. The second season consists of 10-minute-long 2D animated episodes.

In Russia. The series is available on the streaming platform CHILL, on the brand’s official page on Instagram, on the TV channel Mult I Muzyka, and you can listen to it on Apple Music, Itunes, Spotify, Youtube music, Deezer, TikTok, Boom, Joox, Zed+, Gracenote, Spinlet, Zvooq, Boomplay Music, Shazam, Yandex music.

Red Carpet Studio is working on pilot episodes for new series that will come out this year.